The Assault Rifle is a rifle weapon in S4 League.

The Assault Rifle is very similar to a Semi-Rifle: both are held with two hands and both have small spreads. The only difference is the lack of zooming as well as ammo capacity. This weapon becomes more inaccurate the longer it's fired. To work around this, fire shots in 2-3 shot bursts.

It is grey and silver. Instead of firing energy bullets (like most of the weapons prior to Iron Eyes), it fires off live bullets. The damage inflicted is rather high, killing a player in 5~7 shots, excluding criticals. It has a fairly low reload time. 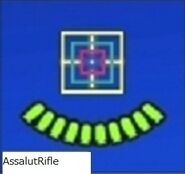