Blade City is a Siege Mode map in S4 League introduced in Season 3. Accordingly to the story, Blade City is a research facility where the Katana and Sigma Blade were developed.

Both teams have a core straight ahead of their base. The third core is found at the plaza in the center of the map, which is the main contested area. Attackers can either stand on the walls surrounding the center core to capture it, making them an easy mark but giving them an edge vs. melee attackers / bombers, or stay on the floor and take cover from the walls surrounding it. Many of the rooms or buildings have passages that can be used as shortcut for moving between places faster or sneaking up on unwary enemies. 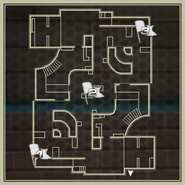