Circle-2 is a small-sized Chaser map.

Circle-2 is the second smallest map in the game, and is also the clearest of all available maps. It is composed of an inner and outter ring and the entire map is suspended in mid air. The chaser starts in the inner ring, where players start on the outer ring. The map is believed to be the level 'above' the map named Circle, which is very similar. The only difference between the two is the second level of Circle is taken away, the colour has changed and walls have been placed around the entire inner ring. This map is made purely for Chaser Mode, and middle to short range weapons are used a lot. The most prominent weapons used are the melee weapons, because of the outter rings walls and the possibility of knocking the chaser out of the ring and falling to their death.

Standing up on the walls of the inner ring or in doorways.

On the outter ring or hidden behind half-walls.

Using a Senty Nell, Place it near a door way. Then, wait close-by, Preferably near a half-wall with a Storm Bat. When the chaser comes close, wait for the Senty Nell to stun them. Take this chance to try and knock them out of the ring whilst stunned. If they jump out of the stun, or miss the Senty, try to flee. 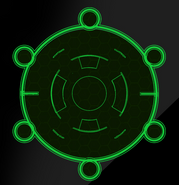