Colosseum is a large-sized and open Touch Down map.

The setting is an outdoor area, consisting of many glass structures, such as buildings, floors, tunnels, as well as the breakable glass dome in the center of the arena, which houses the Fumbi spawn point. The pathways, ramps and stairs towards the center are paved brick. The arena is rotationally symmetrical, like Neden-3.

The team bases are on opposite ends of the stage, within the buildings guarded by lightning fences. Turning right from the base leads to the team's goal, sheltered by a sail-shaped structure. Breakable, fast-repairing bridges connect the goals to the fumbi spawn. When these bridges are not destroyed, they wil allow a straight path for the striker to take to deliver the Fumbi to the goal. Once the bridges are destroyed, the player may be forced to run up the large tunneled side ramp which also leads to the goal.

Turning left from the team base leads to a tall building; there are two of these buildings in total, on opposite sides of the arena. These buildings are inaccesible from the ground floor, but the roof may be used as a sniping spot.

The space in front of the goal is a frequent area of battle, because it is clearly visible even from the opposite goal, to the advantage of snipers, the striker is required to climb two sets of stairs from the bridges to get to the goal, and it is very close to the team base, so it would be heavily protected. It is therefore important for strikers not to act alone when attempting to score a goal.

The ground level is a floor of breakable glass, which may be easily broken by a slamming melee weapon. Anyone who stands on the broken glass will fall into the void. There is also a small ledge beneath the glass which can be used to save the player from falling down, allowing them to return to the game by climbing out of the hole.

The tunnels housing the large ramps are made of non-breakable glass, with a lightning fence on the bottom which allows attacking players to pass through. Going up to the goal via the ramp gives a height advantage for the defending team, which enters from the top of the ramp travelling down.

Players who use melee weapons would usually fight at the centre of the arena, where the Fumbi spawn is, due to the temporary cover provided by the breakable dome, which protects the melee from sniping and long distance shots.

Shooting weapon users would be more useful closer to the goals, especially on the stairs leading to the defending goal, as the area is more open and less cover is provided for the players being shot at.

Snipers may use the following for sniping spots:

For stationary weapons, due to the scale of the map, it is difficult to determine which path the opponents will take to strike. Thus it is best to place the sentry close to the defending goal, as well as protect it from snipers with a skill such as Block. 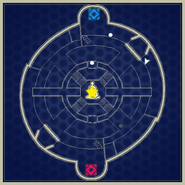