Connest-2 is a large-sized Chaser map.

Connest-2 is the biggest Chaser map available, with a forest terrain. The area is covered with tall grasses, shrubs, high tree tops, and rocks. The amount of foliage in the area gives the map a reputation of being the best "hide and seek" map.

The Chaser usually starts in the middle of the map, where there is a large clearing. A large, climbable monolith marks this area.

The non-chaser players start on the edges of the map, usually behind various rocks or trees.

The players may confuse the Chaser by continuously running in a circle around a tree. Since none of the landscape is breakable, the trees act as natural shields, so the chaser is forced to move around the obstacles. The Chaser may counter this maneuver by circling the tree in the opposite direction. 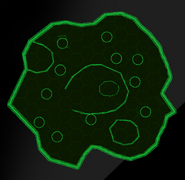 This article is a stub. You can help S4 League Wiki by expanding it.