Highway is a large-sized map for the game mode Death Match, Touch Down and Battle Royal.

It is the second largest map in the game, beaten only by Galleon. It takes place on a section of a highway occupied by estate cars and buses which do not move. The surroundings give off neon colors similar to those in Neden 3. This map caters to the Sniper class because of the complex layout of the second level. While there are many places to hide on the large map, many players will take advantage of this and sneak up behind opponents. There are also a lot of obstacles in this arena which will make the player vulnerable to attacks (lightning gates,etc.).

There are 3 levels of ground on Highway. Players can travel to different levels via the stairwells.

A top view of Highway 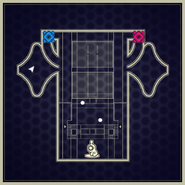