It's design suggests a soccer field, although Touchdown mode is played more similarly to rugby. The upper portion of the map has no cover, and the green field-like floor can be easily destroyed, but these tiles respawn quickly. The underground area provides cover from most snipers, and can be left by shooting the panels near the ramps. The goals are protect by a small fortress on both sides of the field with breakable doors on the front and sides. It's important to note that there is a opening above the side and front doors that players can wall jump to reach.

Players spawn at the top of the fortress in the ideal place for both snipers and Sentry Gun. There is an opening behind the spawn point which leads to the team's Goal, in case the team needs to defend. 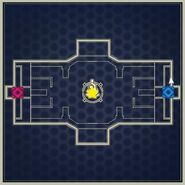