Iron Heart is a medium-sized map for the game mode Siege Mode in S4 League, which follows the theme of Iron Eyes.

This map is rectangular in shape, and consists of many factory-like buildings arranged in a rotationally-symmetrical fashion, to provide an even playing field for both teams.

Players spawn on each end of the rectangular map, in small rooms which can be accessed by the opposing team. The spawning room has two exits, one on the left which leads to the 'outside' area of the map, and one on the right which leads to the closest building, where a Siege base is found. The siege bases closest to each team are found in an upstairs room. This means that each base is closer to one team than the other, and so the closest base to the spawning point is usually heavily guarded.

The third base is found in the centre of the map, in a large warehouse-style building with four entrances. This base is usually the main area where fighting occurs, as both teams will try to take this base before proceeding to the base closest to their opponents. There are also many obstacles in this building where players may hide.

There are also two long corridor-ramps on either side of the map which lead from spawning point to spawning point. These ramps may be used for surprise attacks on the opponent's closest base. 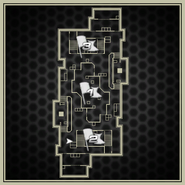