Luna-2 is a medium-sized Death Match map. It is one of the few maps that was released during Dark Lightning. The name of the map refers to the large chained moon at the top of the map, which is meant to symbolise the second moon.

This map consists of a dirt-covered courtyard beneath the moon with many walls. The players spawn in two rooms on opposite sides of the courtyard, and enter the courtyard to battle. The rooms are not protected by lightning fences, so it is very common for enemy players to camp at the players spawning point.

There are two hallways either side of the courtyard which link the two rooms to each other. These hallways have purple/white checkered tiles for the floor, and paintings on the walls. When a player spawns, they may access these hallways by turning right, or by exiting the room and climbing the stairs on the left.

There are two balconies in Luna-2, overlooking the courtyard, which are a common spot for snipers to shoot from. These balconies can be accessed from the hallways by breaking part of the walls. 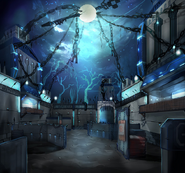