Neden-1 is a medium-sized map for the game mode Deathmatch and Battle Royal.

Neden-1 is the first official map of the S4 League. It is often the first map that is visited by new players who are trying to experience a Deathmatch. The area is very open for beginners, while allowing many hiding spaces and various jumps. The location consists of two warehouses that are surrounded by many gates and boxes; the other side consists of a sewer with several boxes and bridges surrounding it. On higher ground there are several open fields for battle with only boxes in the paths. All of the boxes are breakable. The rooftops are also accessible to all players, but mostly who are often Sniper class.

Front side of Neden-1 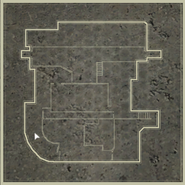