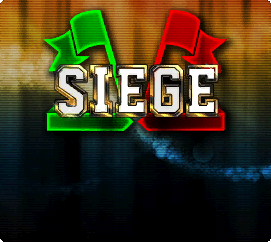 Siege Mode is a game mode in S4 League, introduced during the Iron Eyes Update.

In this mode, the player's objective is similar to Domination in many video games, and to games involving 'capture the flag'. There are three bases within the map, known as "cores". Usually the bases are at equal distances from each team's spawning area, most likely for the fairness of both teams. To conquer a base, the player has to remain stationary for a certain amount of time on the base until the base's perimeter turns a green colour. When the base is captured, many bonus items spawn from the base's center, which can be collected by members of either team. These items include:

While on the base, the player may still be attacked by the opposing team. By having more players standing on the same base, the time taken to capture the base reduces, but if all players leave the base before the completion of the capturing process, the base returns to its original status before the attempted capture.

All bases start off as a grey colour, which symbolises neutrality. When a player captures a base, a 'loading' animation occurs while the base turns green. When an opponent captures a base, it becomes red. The player is able to take over an enemy base once it has been captured, and vice versa. The game ends when a certain amount of points are obtained by one of the teams, or until the time runs out. There is no Half Time, so before playing, the players must choose which character to use for the whole match.

Near the end of a game of Siege Mode, there is usually a 'frenzy' period which occurs. During this period, the background music is faster, and the respawn time is deactivated, so that players respawn as soon as they are eliminated. This makes the game much more fast paced. Also during this time, the bases spawn mainly green and yellow items only.