Skyline is a large-sized map for the game mode Siege Mode in S4 League.

Each Siege base tower has many obstacles, such as walls and boxes, all of which are non-breakable. This allows for many hiding spots for sentries and defending players near the Siege bases. 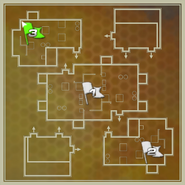