Square is a medium-sized Deathmatch map in S4 League.

The map consists of many buildings, most of which are accessible. The players spawn in caravan-sized buildings on opposite sides of the map.

There are also large crane-like vehicles in the map, which do not move, but are merely part of the environment, providing ramps for the players to move to other buildings.

Because of the size of the map, and the vast amount of hiding places, it is rather easy to sneak to the other team's spawning point for 'camping' purposes. 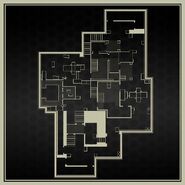