Station-2 is a medium-sized rotationally-symmetrical Touch Down map. It is the best known and most used map.

It consists of a train station, similar to Station-1. On the rail, there's an immobile train. In the middle of this train, the ball (Fumbi) is located. There are two large stations on opposite sides of the rail; each station is the base of a team. A large, breakable bridge which connects both bases runs over the train. The map also includes escalators (non-working), an overhead rail in which players are able to travel on, and many lightning fences around each team's base.

Players in each team start in a round quarter-circular room, with gameplay screens on the walls. This room is protected by lightning fences, so no opponents may enter the spawning point.

Both exits from the round room lead to the station, which consist of the escalators on the left, the large bridge in the middle, and a large wall on the right, covering the station as well as the team's goal.

Running down the escalators through the lightning fence leads to the lower level station, where the immobile train is parked. The windows are breakable, but only the doors allow players through. The ball is located in the centre of this train.

The large bridge leads from goal to goal, station to station, perpendicular to the rail, and it has very little cover. Both the bridge and the supporting pillars are breakable, and players may stand on the pillars if parts of the bridge has already been broken. 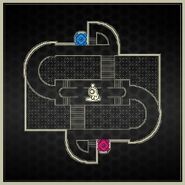