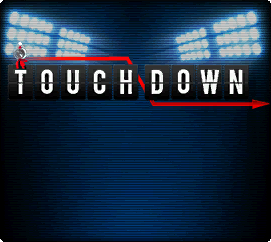 A Touchdown, or TD, is where you capture the ball (known as a Fumbi) and take it to the opposing team's goal. The location of the team's goals and the Fumbi spawn point is dependent on the map in which the match is taking place in. Maximum amount of players are 8 versus 8

The closest comparison to Touchdown would be a One-Flag 'Capture the Flag' game seen in many other Shooter Games. The game mode may also be compared to American football. There will be a ball (Fumbi), typically located in the center of the map. Both teams will rush towards the location in order to obtain the Fumbi first. The player with the Fumbi in hand will constantly be drained of SP until there is none left. The other team members are to assist the player with the Fumbi as they deliver the ball to the goal while under attack by the opposing team. If the delivering player dies, the Fumbi is dropped and can be picked up by any player, ally or opponent. If the delivering player falls off the map into the void, the Fumbi respawns at its starting point, where it can be picked up by anyone who may be waiting there. 'Ball reset' is the term used to describe the respawning of the Fumbi.

The match is split into 2 halves. The first half is typically considered to be a 'warm-up' half. Players will use this time to get used to the surroundings and locate both their goal and the goal of the opponents. This is also the time to plan any early stragetic moves in order to gain an early lead. The first half will end when either one team reaches half the score limit, or the time runs out.

Like Deathmatch, Touchdown also has Half Time. This is the only time players can change their characters either to better combat the other team, to score better, or to defend the team's goal more efficiently. The players may also be entertained (or bored stiff) by the Fumbidance animation which plays during Half Time.

The objective of the game is to take the Fumbi and bring it to opposing team's goal post. This is much easier said than done. Teams will constantly defend their goal post, and the player with the Fumbi is constantly drained of SP, which means they will be limited in wall jumps, running and dodges. It is wise to act fast in order to score, and to organise team members so they can either defend the goals or protect the player holding the Fumbi. Game points are scored only when the Fumbi reaches a goal, but individual player points may be obtained by scoring, assisting a score, attacking and defending a player with or without the Fumbi.

When one of the teams loses with a big advantage it gets special bonus known as pity:

Community content is available under CC-BY-SA unless otherwise noted.