Tunnel is a medium-sized symmetrical Touch Down map.

The arena is roughly a rounded square, with extensions at the top and bottom. There are various ramps and barriers across the map, laid out so that the map is symmetrical. The two teams' spawn points are located on high level platforms on opposite sides of the map. The ball (Fumbi) is located in the middle of the map. Because the area in the middle of the map is clear and prone to shooters, it is more common for players to use the ramps along the sides of the map, away from enemy fire.

In respect to its name, there are two "tunnels" near the spawn points, which extend a short distance towards the middle of the map. The goals are located at the end of the tunnels nearest the middle of the map, with a lightning fence in front of it which kills whoever tries to enters it from the opposite team. This field prevents opponents with Anchoring or Flying from reaching the goal from the front, so the only way to score is to run up the incline and enter the tunnel from the back. Because the entrance to the tunnel can be very well guarded by a block or sentry, it is very difficult to score on this map.

Due to the symmetry of the map, the tunnels and spawn points are in line with each other. This allows snipers to attack players from one spawn point to the other spawn point, or from one tunnel to the other. 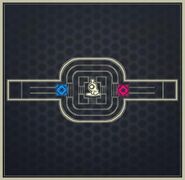