The Turret MK2 is a Mark II variant of the Turret in S4 League. It has integrated shield and slightly faster installation speed.

Contrary to popular belief, Turret MK2's shield does not block incoming bullets like the Shield skill. Instead, it gives its user significant boost in defense against all incoming damage. The defense boost is high enough to let the user survive otherwise fatal attacks, including, but not limited to Spy Dagger stab attack, direct explosion from Earth Bomber or even fully charged Railgun shot.

Interestingly enough, despite what its looks may suggest, Turret's "shield" works on attacks coming from all directions, not just the front. 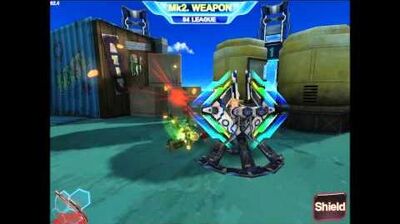